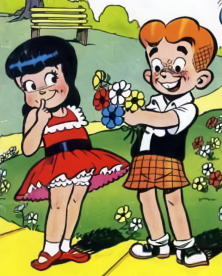 "We played Nintendo!
This was her very first date
I didn't wanna make it seem too fly.
We ate cereal!
She couldn't stay out late
Her mother told her to be home at nine!"
— Another Bad Creation, "Iesha"
Advertisement:

Awww! Don't they make a cute couple? C'mon! You know they were totally made for each other!

What do you mean they're both only 8 years old?

Sometimes, it happens that two characters display a startling amount of chemistry, even though they're both barely old enough to be interested in dating—heck, in an opposite-sex example they might even be making an exception to "Boys/girls have cooties!" (which may help explain their proneness to the Crush Blush; it's embarrassing!) It may be attempted by the authors if the show deals with characters of that age group, but still wants to add in a romantic subplot.

This trope can be Truth in Television as many people get their first crush sometime during elementary school. And sometimes this can turn into a lifelong marriage/relationship... although that is extraordinarily rare.

In most cases, those relations are completely devoid of sexual stuff, and won't qualify as squick for the audience. The simpler way is to ignore it completely, but it can also be used for humor. For example, the kids are so completely in the dark about sex, that they will do something completely trivial and think that that was sex. In other cases, they may discover what is sex really about, and react with some Disgust Tropes. Kissing? Who would want to taste the spit of someone else? The rare case where a kid couple knows exactly what sex is and enjoys every second of it is generally considered to be very unhealthy and cause for concern.

Sometimes, a couple that's a bit older will reference this as their backstory; one partner (usually a woman) says she started chasing the other (usually a man) back when they were kids, and that "it took me X years to catch him—but it was worth it."

May be due to a Relationship Writing Fumble or the fact that Most Writers Are Adults.

A Sister Trope to Toy Ship (the Shipping version), Childhood Marriage Promise, Kidanova. May develop into a Childhood Friend Romance as the characters age and subsequently cement itself as High-School Sweethearts.

Compare Precocious Crush (kid having affection for someone older), Father, I Want to Marry My Brother. Contrast December–December Romance and Affection-Hating Kid.

Not to be confused with Precious Puppy.

Bonus points for Winnie being a puppy, and licking Dennis to show affection.

Bonus points for Winnie being a puppy, and licking Dennis to show affection.