Not Used to Freedom 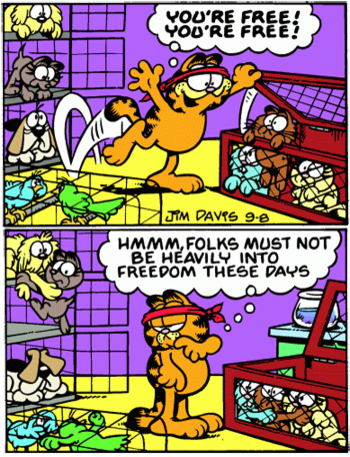 The Outside World is overrated, anyway.
"These walls are funny. First, you hate 'em, then you get used to 'em. Enough time passes, you get so you depend on them."
— Red, The Shawshank Redemption
Advertisement:

Someone has been held for a long time in a place, or has been a member of an institution where their freedoms have been very much limited, such as a prison or a mental hospital, and has either difficulties in fitting in outside, or wants to remain in or return to their former place of confinement. Some wild animals too much used to being cared for by humans might also become unable to function in nature (which is why rangers put up "Don't Feed Wildlife" signs). Some TV shows centered on families also have stories of the mother getting bored when her children are away and she's no longer obligated to do her household duties.

The Old Soldier and The Old Convict can suffer from it, as can a Slave Race, a Servant Race, a Cult Defector, or someone who Desires Prison Life.

Related to Freedom from Choice, Happiness in Slavery, Hope Is Scary, Manchild, Quicksand Box, There's No Place Like Home and Just Got Out of Jail. Can be a consequence of Stockholm Syndrome. May be a factor in a soldier going From Camouflage to Criminal, if they turn to crime because they couldn't adjust to civilian life.

Can be Truth in Television, though real life examples are often far more complex than how it's usually shown in fiction. See more on The Other Wiki here