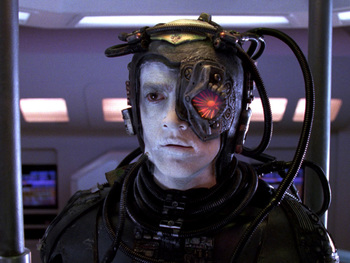 Answering what they think to be a distress signal, the Enterprise comes across a crashed Borg scout ship. All its crew are dead, save one. Clearly against his better judgment, Picard allows the injured Borg (Jonathan Del Arco) to be brought to the ship for medical treatment, though it is placed inside a force field which interrupts its connection to the Collective. Despite Counsellor Troi's misgivings, Picard insists he's fine with the situation.

As part of its medical treatment, La Forge prepares to repair/replace certain of the Borg's cybernetic implants, but Picard takes the suggestion one step further: why not reprogram an implant to introduce a Logic Bomb through this drone into the entire Borg Collective, causing them all to shut down? At a meeting to discuss this plan, Dr. Crusher alone objects, pointing out that this would be tantamount to genocide. Unfortunately for her, everyone else is fine with it, having accepted the non-declared, unofficial state of war between the Borg and, well, anyone they want to assimilate. Unfortunately for them, Crusher's apparent sympathy for the Borg drone only grows as his physical condition improves; she notes that he seems to be frightened and lonely, severed from contact with the other Borg. Meanwhile, Guinan hands Picard a sort of Dark Side version of her usual Whoopi Epiphany Speech, when she fakes an injury during a fencing duel and then defeats Picard as he moves to help.

Advertisement:
Guinan: You felt sorry for me; look what it got you.

The Borg boy continues to improve, and Crusher and La Forge work on testing him out to see how best to implement the Logic Bomb plot. They converse with him and introduce themselves, to which the Borg wonders if he has a name (he only knows the Borg designation "Third of Five"). Trying to sound out a pet name for him, they settle upon "Hugh", sort of a pun on "you...". Now that Hugh has an actual name, La Forge too begins to develop an attachment to him and is having second thoughts about the whole plan. He talks to Guinan about this, but she is uncharacteristically unsympathetic. La Forge challenges her to go visit Hugh for herself. Complicating matters, another Borg scout ship is approaching, presumably to retrieve survivors/scavenge the wrecked ship.

Guinan does eventually go visit Hugh, and she maintains her harsh facade until she lets it slip that her people had been very nearly obliterated by the Borg. Hugh notes that she is lonely, being so far away from any of her kind, and that he is also lonely. Guinan is, to say the least, speechless at this unexpected acknowledgment of emotion from the Borg. Guinan goes to Picard with her new misgivings, only to find him as fiercely defiant as she herself had been. Guinan is having none of it, though and insists that Picard too must at least look Hugh in the eye before turning him into a Tyke Bomb.

Finally Picard agrees and has Hugh beamed into his Captain's Office. Hugh, for his part, recognizes Locutus of Borg, and Picard takes advantage and speaks to him as Locutus. After forcing Hugh to renounce his human name and reiterate his Borg designation, he announces that the Enterprise and her crew will be assimilated, even against their will, or they will die. Hugh doesn't cotton to this idea, having grown attached to his human friends (especially La Forge) but "Locutus" is adamant, culminating in this exchange:

Now Picard realizes that, with Hugh's newfound individuality, it really would be morally wrong to use him as a Tyke Bomb, and the option is floated that Hugh could be offered asylum from reintegration with the Borg. When told this, though, Hugh realizes that the Borg would simply hunt him down and harm the people he now sees as friends, and he voluntarily returns to the crash site where the other Borg will re-assimilate him. As a final note, it is suggested that the Borg will probably erase Hugh's memory of these events but, in the brief time before they do so, they will be subject to Hugh's experiences as an individual... "and that may be the most pernicious program of all!"

So they beam Hugh back to the crash site. Shortly thereafter, the other Borg arrive and quickly reintegrate Hugh as a drone. But, just before they depart, Hugh gives a clandestine nod to Geordi, indicating his yet-intact individuality.

Notable Tropes in this episode: