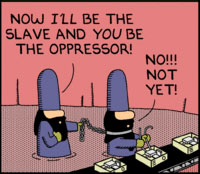 Slave labor looks quite Safe, Sane, and Consensual when explained by Dilbert's Pointy-Haired Boss.
Pa Grape: This time, I really mean it! We should go back to Egypt.
All: Huh?
Pa Grape: Don't you remember? Snorkeling in the Nile, three square meals a day, plenty of exercise; oh, it was paradise.
Tom: We were in slavery.
Pa Grape: Nothing is perfect.
— VeggieTales, "Josh And the Big Wall"
Advertisement:

Bob is in servitude to Alice, but doesn't want freedom, and is not brainwashed. There are four types of this:

Compare Subordinate Excuse, which is similar, but without the slavery. If the masters are vampires, the willing subordinates are often Vampire Vannabes.

See also Happiness in Mind Control. Often a subtrope of Stockholm Syndrome, especially if there's emphasis on how the character gradually became happy in captivity. Compare Freedom from Choice and Not Used to Freedom. Contrast Slavery Is a Special Kind of Evil and I Just Want to Be Free. May lead to Unfulfilled Purpose Misery.

This may create very Unfortunate Implications, as similar beliefs have been used to argue in favor of slavery in Real Life.