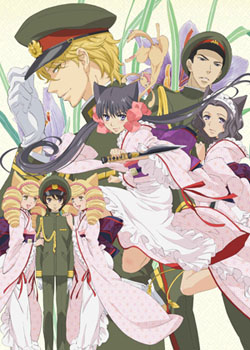 Otome Youkai Zakuro is a manga series written and illustrated by Lily Hoshino. It started running monthly in the seinen manga magazine Comic Birz in November 2006.

Spirits and humans have long had a grudge against each other, but that's about to change. During the Meiji Era, Japan has now established the Department of Spirit Affairs to handle relations between humans and youkai. Three new recruits - Kei Agemaki, Hanakiri Ganryu and Riken Yoshinokazura, are going to team up with four half-spirit girls - Zakuro, Susukihotaru and the twins, Bonbori and Houzuki. The relationships are tense, but relations between humans and spirits - and, perhaps, romance? - are about to begin.

Otome Youkai Zakuro was adapted into an anime in the fall of 2010 by JC Staff.

US viewers may watch this anime legally on Crunchyroll.