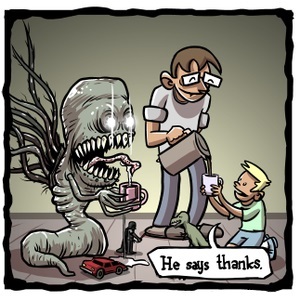 "Duh! Why do you think I'm called "Youngblood"? Only the young can see me. Only kids!"
— Youngblood, Danny Phantom
Advertisement:

When in a story someone or something can only be seen by a select group of people, in an overwhelming amount of cases those people will be the children. Why? Possibly because Children Are Innocent, and they do not automatically disregard the unusual as impossible. This can lead to an Adults Are Useless scenario, where the child can lead their parents straight to the creature and even talk with it, but the adult simply cannot tell that the creature is there.

There is also the idea, closely related with the concept of the Masquerade, that all the fantasies one had as a child were in fact real, but people started denying them to be as they grew older. This is usually seen as a natural process that all people are subject to, although some are more seriously affected than others. Imaginary Friends and Santa Claus are typically presented as this. There is An Aesop about losing something important part of yourself with losing your inner child in stories that feature this idea. Occasionally you get a rare adult who is exempt from under the effect of this, usually because they have kept their childish demeanour and might be viewed as somewhat strange by normal society. Another grown-up who is affected by this but is still able to acknowledge the existence of the (to him) unseen world (out of faith or from second-hand experience) is also very common. Some coming of age stories present this as a tragic but inevitable process as the character is fully aware that this is happening to them, gradually losing their memory about how things used to be.

Where live-action tv and films are concerned, this trope becomes extremely convenient for young child and animal actors. Adults and older kids can be told that an actor is supposed to be invisible and to pretend he's not there, but a toddler or animal won't grasp all that and will interact with him regardless.

Subtrope to By the Eyes of the Blind. Sister trope to Invisible to Normals. Compare Adults Are Useless, Here There Were Dragons, and Children Are Special.