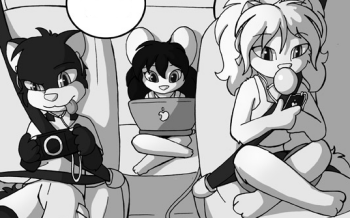 Caution Link is NSFW and leads to Jay Naylor's Patreon page; currently both Better Days and Original Life are behind a paywall. is a comedy webcomic written by Jay Naylor. The strip began on June 1, 2009, right after Naylor finished up its predecessor, Better Days. It details the life and times of Fisk and Elizabeth and their children - Abigail, Thomas and Janie - as well as the lives of other Better Days cast members and their children.

Unlike Better Days, Original Life features a lighter and more humorous plot, with minor segments of dramatic moments interspersed throughout. Also, rather than following Fisk and Lucy as they progress through life as in Better Days, the characters of Original Life do not age; the comic is also set in modern times, as opposed to the gradual timescale of Better Days. These changes are mainly due to Naylor opting to ‘just keep it fun’, stating that he enjoyed the lighter chapters of Better Days far more than the somber ones.

Sadly the series was discontinued in 2016 cited by the author as a lack of inspiration in further stories for the series. An new spin-off starting in 2018 began with the author releasing them on newly created a Patreon page as well as on Tumblr

. Titled Original Life +5, the series jumps forward five years into the future centering on the same cast older, but not much wiser...