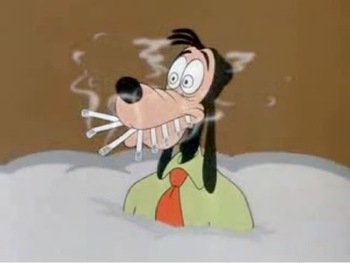 Tobacco smoking is addictive. Therefore, characters who smoke will sometimes find themselves in scenes where they are desperately searching for a cigarette, or a means to light it, or (more recently) a place where they can light up.

Goes hand in hand with Cigarette of Anxiety. Compare Must Have Caffeine. Beware Nailed to the Wagon.