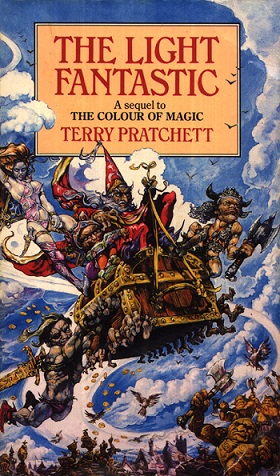 As it moves towards a seemingly inevitable collision with a malevolent red star, the Discworld has only one possible saviour. Unfortunately, this happens to be the singularly inept and cowardly wizard called Rincewind, who was last seen falling off the edge of the world ....
Advertisement:

The second Discworld novel, from 1986 and a direct sequel to The Colour of Magic. It opens with the Octavo saving Rincewind and Twoflower from their No One Could Survive That! fate in the first book by changing the entire world around them to stop them from falling off the edge of the Discworld. They are dropped in a secluded forest where they befriend a gnome named Swires.

At the same time, power struggles rage at Unseen Universities when Ymper Trymon schemes to take the job of Deuteragonist Arch-Chancellor Galder Weatherwax. After summoning Death to question about the sudden changing of the world, the wizards set out on their own quest to find Rincewind.

And unbeknownst to the citizens of the Disc, Great A’Tuin continues to travel straight towards an inevitable collision with a malevolent red star.

Rincewind and Twoflower eventually meet and team up with Cohen the Barbarian, an elderly barbarian who was once a legendary hero known widely across the Disc, and a young woman named Bethan, whom Cohen rescues from being sacrificed by a group of druids, not that she’s grateful about it.

The Light Fantastic shows itself to be a much more developed Discworld story than its predecessor: the novel abandons the episodic format of the first novel in favour of a single interconnected plot.

This book is also notable for introducing several characters and concepts that would later become pillars of the Discworld series, including Unseen University (mentioned in passing in The Colour of Magic, but explored as a setting here) and the Librarian (who gets turned into an orangutan by the Octavo’s Change spell), the Weatherwax family (through Galder Weatherwax, believed to be a cousin of the much more well known character Granny Weatherwax of the later novels), pixies, trolls, dwarves (and Swires, who would go on to become a member of the City Guard in later novels), Cohen the Barbarian, and Death's Domain and family (through the character of Ysabell, Death’s daughter).

Preceded by The Colour of Magic, followed by Equal Rites. After a brief cameo role in Mort, Rincewind next went on to star in Sourcery.