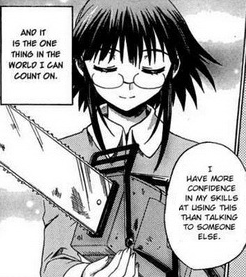 Ahhh! Chainsaw! The great communicator!
"There's just something about oversized sharp objects that really bring out the craziness."
— Jason Miao

Sometimes you'll come across a girl, often cute and sweet-looking... but she'll be brandishing some sort of scary weapon at you in a murderous fashion! EEEEEK! Run for the hills!

Most commonly the weapons are knives, but other psycho weapons are also common, such as chainsaws or other instruments of pain and destruction.

She's usually also Yandere, or, failing that, Cute and Psycho. A close subtrope to Nothing Nice About Sugar and Spice.