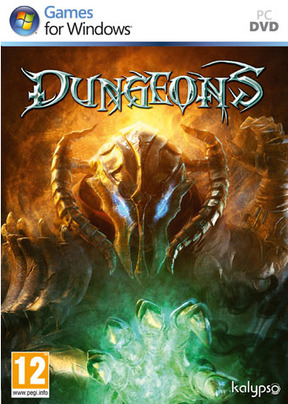 A strategy game developed by Realmforge Studios and published by Kalypso Media in 2011, can be somewhat considered the spiritual heir of Dungeon Keeper. Also had a standalone expansion called "Dungeons: Dark Lord".

Like the above mentioned game, you play as an Evil Overlord residing in his dungeon with his goblin minions. You have to build and expand the dungeon by using Gold and Soul Energy which you can harvest by capturing heroes that wander into your dungeon. In order to gain more and more Energy you'll have to keep them satisfied with treasures, good fights, traps and other goods. It also has a single player campaign with a unique gameplay system, where you lead the Dark Lord Deimos in his Roaring Rampage of Revenge against Kalypso, his treacherous ex-girlfriend.

Compared to Dungeon Keeper it's much more simplified and focuses more on heroes than your own creatures and takes elements from Theme Park and Tower Defense systems.

In April of 2015, the sequel, Dungeons 2, was released, changing the core gameplay to something much more similar to Dungeon Keeper, albeit with a secondary map of the overworld, which functions more like an RTS game. The forces of evil have also been split into three distinct factions, the Horde (playable for much of the campaign), the Demons (enemies, later playable) and the Undead (enemies, playable only in skirmish/multiplayer and only with DLC). The campaign casts you as an Evil Overlord seeking vengeance on the heroes who sealed him away.

Dungeons 3 was released on October of 2017, building on the gameplay of the second one. This time, it features the Prime Evil of the previous game conquering a new land with the help of a Dark Elf named Thalya, who embraced their evil side after a little nudge from Prime Evil.