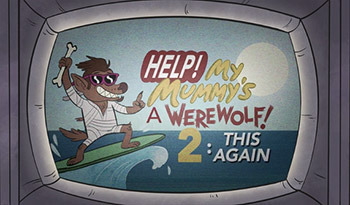 This fall: Help! My Mummy's a Werewolf! 3: Another One?!
"God willing, we'll all meet again in Spaceballs 2: The Search for More Money."
— Yogurt, Spaceballs
Advertisement:

Comedies in general (and parodies in particular) often target popular genres and the conventions thereof. Of course, one of the many reasons these genres are so ripe for parody in the first place is because the conventions of them have been repeated to the point of ridiculousness by sequel after sequel after rip off after remake.

As a result, it's not uncommon for parodies of these genres to make a joke about having a sequel. Oddly enough, the movies that make these jokes rarely if ever end up actually having sequels made to them. This is probably because the jokes are inserted for the purpose of making fun of sequels, and actually creating one after that would be missing the point.

As part of Lucian of Samosata's 2nd-century True History, this trope is Older Than Feudalism.