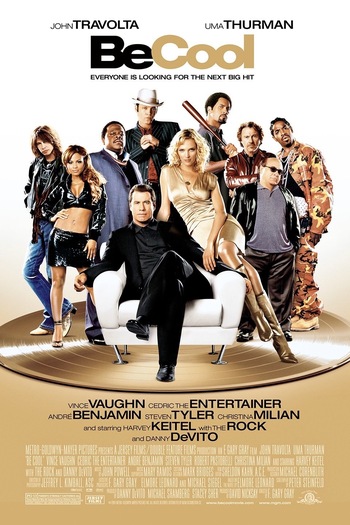 Be Cool is a 2005 crime comedy film directed by F. Gary Gray, starring John Travolta, Uma Thurman, and a host of other well known actors, singers, and celebrities. It is a sequel to the 1995 film Get Shorty, with Travolta reprising his role as Chili Palmer. Both films are based on a series of novels by author Elmore Leonard.

Former Mafia Loan Shark Chili Palmer (Travolta) is a Hollywood producer who has grown jaded with the movie industry, and now wants to try his hand at the music business. He finds his chance when he meets Linda Moon (Christina Milian), a gifted young singer whose talents are going to waste under her current manager. Certain that she can become a superstar, Chili takes Linda under his wing and introduces her to Edie Athens (Thurman), the widow of an old friend—who Chili saw murdered just the day before—who now has full control of her former husband's record company.

In short order, Chili learns that his new career path might not have been the safest choice. Seemingly everyone in the industry suddenly wants a piece of him: from Linda's former manager, to the Russian mafia, wannabe gangstas, actual gangstas under the employ of a celebrity producer, a flamboyantly gay bodyguard, and a pair of cops that have had their eye on Chili for quite some time. However, Chili has a shady past of his own, and those gunning for him quickly discover that he knows how to play the game better than anyone in the business.

Be Cool provides examples of: