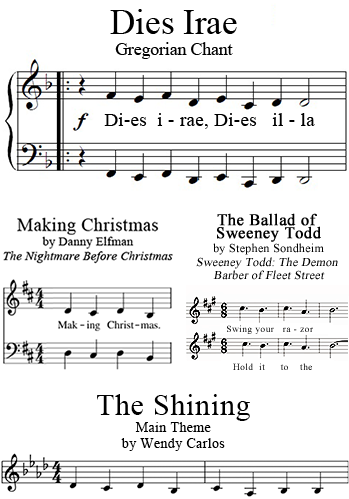 "Dies irae, dies illa" from the original Gregorian chant, with three variations from animation, theatre, and film
"This Easter egg of a melody has been used by multiple composers over the years as a musical shorthand, or word, for death, doom and gloom, the creeps."
— David W. Collins, The Soundtrack Show, "Doom and Gloom: Music has a word for 'Death'

When composers want to create the impression of impending death and doom in their score, they often quote or reference the first four to eight notes of Dies Irae, Dies Illa (the Gregorian chant, not the Mozart or Verdi versions). This Standard Snippet has been used across decades of scores

ranging from Silent Movie soundtracks to modern media medleys, and in centuries of Classical Music compositions.

The four note phrase "dies irae" starts on one note (usually F), then half-step down, half-step up to the first note, one-and-a-half-steps down. The descending notes and minor key create a somber, ominous feel. It can be instrumental or vocal, with or without the Ominous Latin Chanting, but it always sounds like something isn't right.

Dies Irae, Dies Illa quotes and references can create a sad, gloomy, or dark atmosphere. Overt, bombastic quotes may signal that characters are in a life-or-death situation or reveal that someone has met their end. Subtle references may shift the key, change the timing, play it backwards, or bury the notes underneath a happy-seeming bright melody to hint at unseen danger. The four notes of "dies irae" are most frequently quoted, and are sometimes followed by "dies illa" to create an eight note quote. The use of Dies Irae, Dies Illa in the requiem mass for funerals gave it a lasting association with death, further cemented by repeated quotes throughout the centuries.

The Latin phrase "dies irae, dies illa" means "day of wrath and doom impending" in the Vatican-approved adaptation. literal The lesser known and less poetic formal equivalence translation is "the day of wrath, that day," leading into the next line "will dissolve the world in ashes." The original Dies Irae, Dies Illa

is a Gregorian chant about the Last Judgment set to the words of a 13th century Latin sequence. Berlioz's Symphonie Fantastique version

brought it to the forefront of musical thought and is what most later references are based on.

This trope is about using or deliberately referencing a specific melody which originated as a Gregorian chant. It is not about other works with "dies irae" in their titles or derived from the same Latin text sequence. This trope does not include Mozart and Verdi's compositions with the same name and text because they do not use the original melody. Similar tunes need evidence that the composers were intentionally inspired by the original Dies Irae, Dies Illa.

Subtrope of Standard Snippet and Mood Motif; may be used as a Leitmotif. Compare "Pachelbel's Canon" Progression and Also sprach Zarathustra.