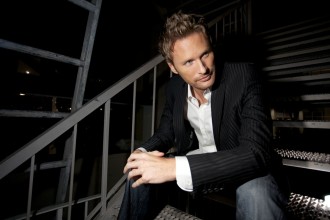 Brian Theodore Tyler (born May 8, 1972) is an American film, television and video game composer who primarily creates scores for action adventure films. Tyler pursued a film career in high school, and was eventually tapped to compose the soundtrack to Six String Samurai in 1998. From there, Tyler went to score a number of critically-acclaimed scores for such films as Frailty, Darkness Falls, Constantine and Annapolis.

In addition, he has scored multiple installments of major Hollywood franchises, including the 3rd-5th, 7th and 8th The Fast and the Furious films, the fourth and fifth installments of Final Destination and all three installments of The Expendables. His works blend heavy symphonic work with bombastic musical cues.

Outside of Film, he has composed the current official theme song

for Formula One of all things (in use since 2018, which also makes him a

Promoted Fanboy, to that effect.)

Tyler has also proved to be very good at melding past themes created in older franchise works with his own musical motifs (to ensure a sense of continuity). These include Rambo, Alien Vs. Predator: Requiem and Call of Duty: Modern Warfare 3. Tyler seems to be following in the footsteps of the late, legendary composer Jerry Goldsmith as he is now working with adapting some of Goldsmith's scores (Rambo, Alien vs. Predator, Timeline) with the latest being that of adapting the new Universal logo fanfare for its centennial anniversary. He is has also shown signs of being just as eclectic as Goldsmith, using a collection of instruments from various ethnic backgrounds and more strange devices such as retro cars, and has proven to be just as prolific.

Although he didn't score Skyline (his colleague Matthew Margeson wrote the music for that one), he was one of the executive producers.

Tyler has also composed scores and themes for the following television series:

And the following video games: