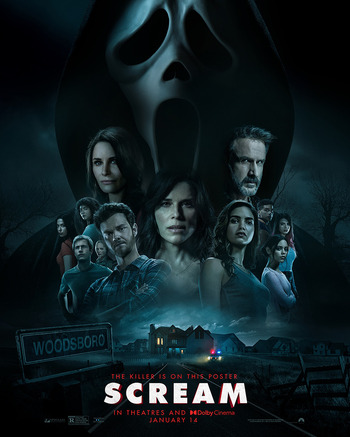 It’s always someone you know.
"It's an honor."
— Ghostface
Advertisement:

Scream, or as it's colloquially known, Scream 5, is a 2022 Meta Slasher Movie directed by Matt Bettinelli-Olpin & Tyler Gillett, from the filmmaking collective known as Radio Silence (V/H/S, Ready or Not). It is the fifth film in the Scream franchise, and the first to not be directed by Wes Craven after his death in 2015, as well as the first film not to be distributed by Dimension Films, with Paramount taking over distribution after acquiring the franchise following the collapse and liquidation of The Weinstein Company.

After another decade since the last Ghostface attack, Sidney Prescott (Neve Campbell), Gale Weathers (Courteney Cox), and Dewey Riley (David Arquette) are faced with a new string of murders revolving around a familiar-looking ghost-faced killer who seeks to uproot the town's dark secrets.

The film was released on January 14, 2022, delayed from a previously intended 2021 release. It also has a release gap of nearly eleven years between it and the last installment, just slightly shorter than the gap between the third and fourth films. Due to the film’s critical and commercial success, a sixth installment was greenlit within a month of its release

that she wouldn't return due to a pay dispute, making 6 the first Scream film without Sidney Prescott.