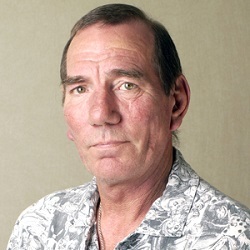 "At the end of the day, acting is all about telling lies. We are professional imposters and the audience accept that. We've made this deal that we tell you a tale and a pack of lies, but there will be a truth in it. You may enjoy it, or it will disturb you."
Advertisement:

Peter William "Pete" Postlethwaite, OBE (7 February 1946 - 2 January 2011) was an English actor. Although he was largely a supporting actor, he regularly received critical acclaim for his performances.

Director Steven Spielberg called him "the best actor in the world" after working with him on The Lost World: Jurassic Park. He received an Academy Award nomination for his role in In the Name of the Father in 1993 and was made an Officer of the Order of the British Empire in the 2004 New Year Honours list.

Postlethwaite was diagnosed with pancreatic cancer in March 2009. He continued working as an actor until late 2010 despite his illness, and eventually passed away from complications related to the disease in January 2011. Less than a month after his death, he was nominated for the BAFTA Award for Best Supporting Actor for his role in Ben Affleck's The Town (the only such accolade the film received).