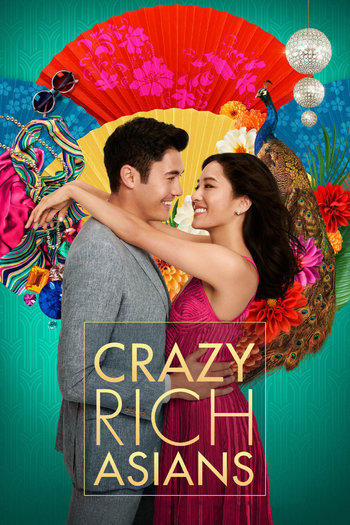 The only thing crazier than love is family.
"These people aren't just rich — they're crazy rich."
— Peik Lin
Advertisement:

Crazy Rich Asians is a 2018 Romantic Comedy film adaptation of Kevin Kwan's book of the same name. It is directed by Jon M. Chu, written by Peter Chiarelli and Adele Lim, and stars Constance Wu, Henry Golding, Michelle Yeoh, Awkwafina, Gemma Chan, and Ken Jeong. It is notable for being the first American film in 25 years to feature a predominantly Asian cast following the 1993 film adaptation of The Joy Luck Club.

Like the book, it features Rachel Chu (Wu), a Chinese-American economics professor who travels to Singapore with her boyfriend Nick Young (Golding) to meet his family for his best friend's wedding. Upon arriving, Rachel discovers that Nick and his insanely rich family are the biggest developers in Singapore, and Nick is in line to inherit everything. This creates tension between Rachel and Nick's family, especially his cutthroat mother Eleanor (Yeoh), who doesn't approve of Nick being with a commoner.

Two sequels based on the other two books in the trilogy, China Rich Girlfriend and Rich People Problems, are in the works.