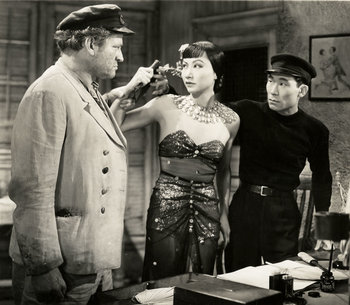 Daughter of Shanghai (also billed as Daughter of the Orient) is a 1937 Hollywood film. Anna May Wong plays Lan Ying Kwan, a young heiress whose father is suddenly murdered just as he is about to help expose an alien smuggling ring. Lan Ying takes it upon herself to investigate the smugglers, going undercover as a dancer in the club they're using as a front. Also investigating the case is government agent Kim Lee (Philip Ahn), who also goes undercover.

Daughter of Shanghai is unique in that it's an old school Hollywood film that's Asian-focused, decidedly un-racist about it and casts actual Asian-American actors in the lead roles - as opposed to white actors in Yellowface. Indeed it was one of the few films where Anna May Wong was top billed and playing a non-stereotypical Chinese character. Despite its status as a B-movie, it's for this reason that the film was selected for preservation in the National Film Registry.

Anthony Quinn appears in one of his first roles as Harry, one of the goons in the smuggling ring.