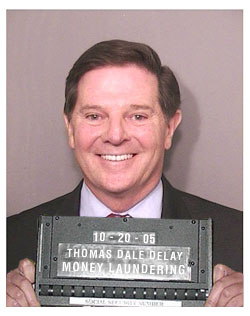 Nothing gets in the way of a politician's smile before a camera.note The above is a Photoshop of Tom DeLay's actual mugshot, altered to make it clearer that it's a mugshot — the conviction was overturned in 2014 and he was cleared of all charges (the placard went out of style in the '90s, since mugshots are now stored digitally and the name, date, and so on are now stored in the image's metadata).
Advertisement:
"No, you need me. You wouldn't be much of a hero without a villain. And you do love being the hero, don't you? The cheering children, the swooning women. You love it so much it's made you my most reliable accomplice. … You could have crushed me anytime you wanted. And it wasn't the law or the will of the people that stopped you. It was your ego. Being a hero is too important to you."
— Lex Luthor to Superman, Justice League, "A Better World, Part 1"

One smile is a vote gained, maybe; one frown is a vote lost, definitely.

Most Villains and Heroes catch onto their roles quickly — one wants to Take Over the World, one wants to save it; one wants to Kill All Humans, one wants to protect them. But for all their differences, once they choose a side, they have the same problem: they're a Slave to Public Relations.

To both Heroes and Villains, reputation is everything. Actions don't determine your rep; rep controls your actions. If their reputation is ever at stake, they must act according to their role to reinforce their image.

Heroes always have to maintain a Good reputation. They have to Save the Villain, can never Shoot the Dog, must modestly declaim their own greatness, and above all, Thou Shalt Not Kill. It's the reason they stick around to help an Untrusting Community rather than leaving when they're obviously not wanted and why it hurts when you can't please everyone. On the flipside, once wronged a hero is perfectly justified in getting some amount of comeuppance since it's only "fair".

Some villains also want a Good reputation. If they're not a Knight Templar who completely believes they are good, they'll be a Villain with Good Publicity and pretend to do good. They'll secretly pour all their investments into a Kill Sat to cause The End of the World as We Know It, but they'll do it all under the radar (or control the radar) or tell people that it'll change the future. This good rep gives them a token Karmic Protection against a hero just barging into their homes to arrest them, as well. Some of them will even expend the effort on Bread and Circuses to actually do good.

Nowadays, though, a great majority of villains are going for a 0% Approval Rating. Evil Is Cool and Good Is Boring, and the Noble Demon and Card-Carrying Villain will do everything in their power to earn their Bad reputation and cover up their Hidden Heart of Gold. Villain Cred is a point of honor for these people. A hero could Blackmail them for life just by taking a snapshot of them being Licked by the Dog. Conversely, the villain will hit a hero where it hurts and complicate their life by orchestrating a frame-up.

This public relations mindset doesn't do much for the old "Be Yourself, do the right thing, and don't care about what others think about you" Aesop. It even gives the Big Bad some extra leverage. A Diabolical Mastermind doesn't have to shoot that meddling hero to get revenge for foiling that armored car robbery, just give some incriminating shots of him trespassing to save someone falling from a burning building to the local paper. And if that Cape is a real pain in your neck, if you frame them for a crime, you can count on them not trying to break out of prison since they're bound to follow all the rules. It's dangerous being a Slave To PR. They should have become an Anti-Hero.

Nothing solidifies the Hero/Anti-Hero line better than this trope. Anti Heroes do what they have to do, not what looks right. They do their own thing, whatever serves their purpose, and couldn't care less about what their reputation is. The town hails them as a hero for killing that drug dealer? They don't care. The cops are crying for their head on a pole for starting that street rumble? They don't care. They've been locked in jail while there are serious criminals out there waiting to be taken down? They'll break out. In fact, they'll often clash with the Designated Hero over this difference.

Mind you, Anti Heroes do prefer a fearsome, rebellious reputation, but that has more to do with appearing brave and tough than good/evil.

The Underling with an F in PR is the bane of these people no matter where they stand on the karma meter. See Lawful Stupid, Chaotic Stupid for when this is taken to its extreme. Compare Contractual Purity. Contrast What You Are in the Dark.

Real-life actors and movie industry workers are slaves to this, too. It's Selling the Show.

Alternative Title(s): Slave To His Reputation