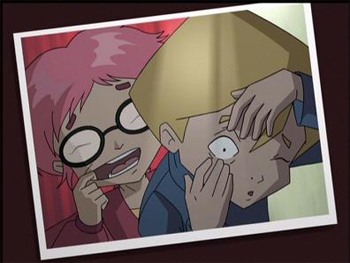 A specific form of photo montage.

Some characters, usually a romantic couple, rush into a photo booth, and the audience is treated to a brief montage of the photos they took there. The last picture tells us about the couple in question: if they're becoming True Companions it will be a funny mugshot; if they're becoming more than friends, it will be a surprise kiss or something more serious to suggest the progression. This is a common feature of girls' night out, too, and can usually be spotted as a small part of a greater montage.

11 and Max at Starcourt

11 and Max at Starcourt