"Shia LaBeouf" Live is a Rob Cantor solo song and has its own page. If a link referring to that song brought you here, please go back to the previous page and fix it. 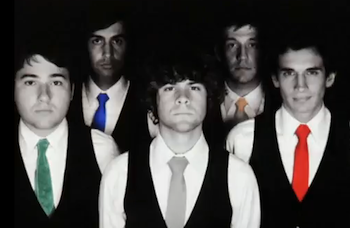 Andrew, Zubin, Ross, Rob, and Joe
"We think we're playing in a band
But we'd love to give you all a hand!"
—From "Welcome to Tally Hall"

Tally Hall is a five-piece band based in Ann Arbor, Michigan. They're best known for their color-coordinated ties, upbeat melodies, and whimsical-yet-clever lyrics. They formed in 2002 at the University of Michigan with five members: Rob Cantor (yellow tie, guitar and vocals), Steven Gallagher (gray tie, drums), Joe Hawley (red tie, guitar and vocals), Andrew Horowitz (green tie, keys and vocals), and Zubin Sedghi (blue tie, bass and vocals). When the band decided to take themselves more seriously as musicians, Steve bowed out and was replaced by Ross Federman.

(often abbreviated to T.H.I.S.) in 2008 and 2009. Each episode is roughly ten minutes long and sometimes debuts a music video.

Not to be confused with American soccer goalkeeper Talmon Hall, who goes by the nickname "Tally".

Going once, going twice, every trope here has a price: