Working Out Their Emotions 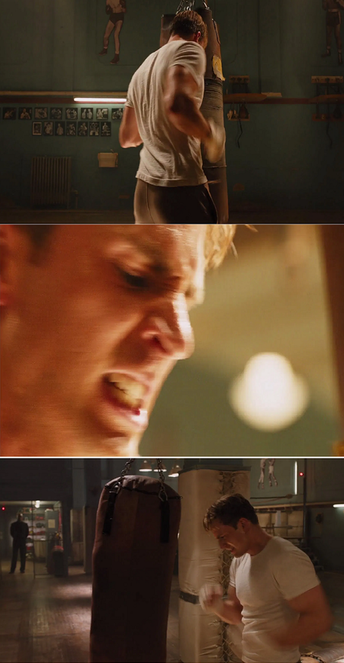 Even Captain America needs a way to relieve stress.
Advertisement:

A character is upset. Really, really upset. They need something constructive to do with themselves to let off some steam, but art takes too much time, they don't want to break anything, and they aren't about to destroy themselves with Comfort Food, a Cigarette of Anxiety, or by drinking, so what else can they do? Well, when someone has a lot of pent-up frustration and just can't sit still, a common way to handle the situation is by picking up some weights and exercising the pain away.

This works for a multitude of reasons. The activity gives them something else to focus on, while also allowing them to keep moving. They get to do something productive and healthy for both their body and their mind, burning calories while letting their emotions out. This may even serve as a good way to let the audience and other characters know this character is angry- after all, if a character who usually has no physical ability is found furiously lifting weights in their room, something isn't quite right.

Another big reason for this may involve the opinions of other characters. If this is someone looked down upon for being weak, especially if they're a male, this emotion-borne act may signify that they're finally done with being mocked, letting their hurt feelings inspire them to become the strong person they believe they need to be.

Of course, this need not be a literal trip to the gym. Characters can throw themselves into sports, physical training, or even a fight, so long as the intent is that they're using these activities to take out their anger while getting stronger.

This method is particularly helpful for a few characters, mostly those who can't or don't want to express their emotions in a "weak" way. "Macho" men, for example, may find emotion to be a weakness, and so deal with it through physical activity, because beating up a punching-bag or doing sprints around the track is a lot manlier than letting their feelings show. That said, this trope can apply to any sort of character, regardless of how "tough" they usually are.

Truth in Television; this is a common way people deal with stress in real life.

Compare Angry Dance and Dance of Despair, other ways a character can use physical activity to deal with their emotions, as well as Percussive Therapy, where anger is taken out by beating someone or something, and Hulking Out, where a person literally gets stronger as they become angrier. This may lead to Workout Fanservice or Kingpin in His Gym.

Helps Me Focus My Anger

Helps Me Focus My Anger