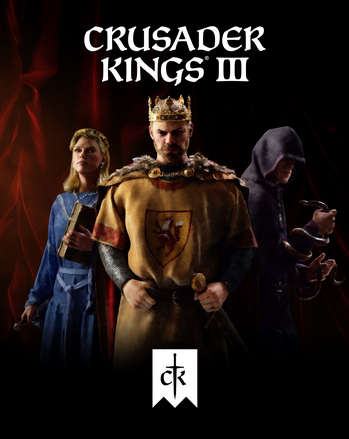 Crusader Kings III is a Grand Strategy game developed and published by Paradox Interactive, and the third entry in the Crusader Kings series. The game was revealed at PDX Con 2019 in October, and released on September 1, 2020.

The game follows the mechanical structure of its predecessors, with changes and improvements. Character portraits are now rendered as 3D models that change depending on traits and physical conditions, and several core gameplay systems have been reworked to be more intuitive. The game also features a more detailed map, displaying holdings more clearly and expanding the playable area to Central Africa and more of South and Central Asia. However, there are only two starting dates (January 1st 867, and September 15th 1066), and the start date can no longer be adjusted day by day. In addition, only three government types are playable: Feudal note where vassal obligations are decided by negotiable contracts, Clan note where vassal obligations are linked to vassals' opinion of their liege and Tribal note where vassal obligations are linked to the liege's Level of Fame, a measure of how much prestige they've earned throughout their lifetime.

Released in March 2021 (together with patch 1.3), the first non-cosmetic DLC, Northern Lords, is a small "flavor pack" focused on Norse realms. The first major expansion pack, Royal Court, was released in February 2022 (together with patch 1.5). It adds a fully 3D throne room for Feudal and Clan rulers of sufficient rank (basically kings and emperors), a massive number of new events and interactions that take place at court, a new "grandeur" mechanic that rewards rulers who invest in their court, the return of artifacts (which are now fully modeled when put on display in the throne room) and the ability to reform or diverge one's culture, or hybridize with a completely different culture if the two are successfully integrated within the same realm. The free patch 1.5, among other changes, adds an inventory system for equipping weapons, armor, and regalia, and brings back minor titles from Crusader Kings II as court positions with more gameplay relevance. The second "flavor pack," Fate of Iberia, which focuses on the vibrant and complex history of medieval Iberia, was released on May 31, along with patch 1.6. In September, Patch 1.7 was released together with the Friends & Foes event pack, which adds in many new events related to relationships, along with the feud mechanic.

The game also received console versions for the Xbox One and Playstation 5, a first in the Crusader Kings series.