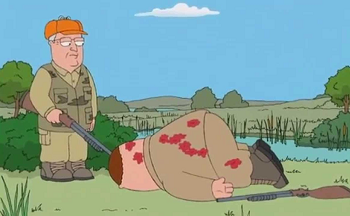 No one told him it was Griffin season.
"You will forsake all claim to your brother's inheritance and start north before evenfall. If you do not, then on the morrow we shall have a hunt, and somewhere in these woods your horse will stumble, and you will be thrown from the saddle to die... or so I will tell your mother. Nothing would please me more."
— Lord Randyll Tarly (to his son Samwell Tarly), A Song of Ice and Fire
Advertisement:

A specific and common variety of Make It Look Like an Accident, this is an assassination attempt during a hunting party which cleverly takes advantage of all of the weaponry about to "accidentally" fire upon a fellow participant. Particularly clever about this method is that even if the perpetrator was identified as firing the fatal shot, at most, they appear guilty of manslaughter.

The weapons aren't the only dangerous things one encounters while hunting, of course: variations of this trope are seen in which the victim is killed by a riding "accident" or their supposed quarry or something else. These can make for the most convincing "accidents", but tend to be somewhat more complex to arrange.

Of course, sometimes, it fails to look like an accident at all.

Compare This Bear Was Framed, which can overlap. Also compare Unfriendly Fire.

As an (occasional) Death Trope, expect unmarked spoilers below.