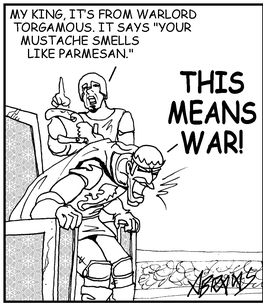 Talk about a (lactose) intolerant king.
"Of course you realize, this means war!"
— Groucho Marx, then Bugs Bunny

A declaration that someone has broken the last straw, crossed the Moral Event Horizon, hit the Berserk Button or otherwise gone too far. The people making this declaration will now commit themselves to unleashing every ounce of asskicking they have at you until they get their way, and will not allow anything to stop them.

If the offended party is a Karmic Trickster, expect much Slapstick to follow. The Japanese have a specific cultural sub-trope and Stock Phrase for this: This Is Unforgivable!. May lead to a character exhibiting Crouching Moron, Hidden Badass, Let's Get Dangerous! and similar qualities. Compare It's Personal. See also Pretext for War, when the trigger is blown out of proportion to start the war.

You can expect that this declaration will be followed by a Roaring Rampage of Revenge and/or a No-Holds-Barred Beatdown. Particularly when made by an otherwise peaceful character.

Not to be confused with the 2012 romantic action-comedy film.