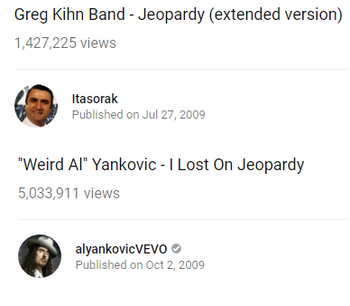 Above: A YouTube upload of the song "Jeopardy". Below: Weird Al's parody. Notice how the parody has almost four times the views.
"Spoof films used to be so good that they'd eclipse the movies they spoofed."
— Gabriel Morton, The Ego Review: Age of Evil

When a parody has become more popular than the property that it's a parody of, often to the point where those unfamiliar with the source material will believe that the parody is its own thing. Perhaps the original work loses cultural relevance while the parody has more staying power. Alternatively, the parody could appeal more to a different demographic through its humor or content.

Often, people who are only 'familiar' with a work through the parody are surprised when the subject of the parody turns out to be better than they thought.

Occasionally this can overlap with Ret-Canon, where aspects of it get associated with the original work, even if the parody is forgotten.

Related to the concept of a Forgotten Trope, except it is not tropes but works or personalities that have been forgotten. See also Adaptation Displacement, Pop-Cultural Osmosis, Pop-Cultural Osmosis Failure, Older Than They Think, The Coconut Effect, Covered Up, Sampled Up, Revival by Commercialization. Contrast Shallow Parody, when lacking knowledge of the original work merely renders the parody meaningless.

Be careful: If the original still has a respectable pop culture presence, then claiming the parody is better known may tend toward Fan Myopia.