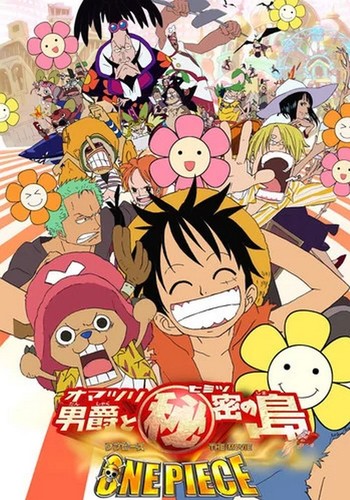 Hey, a fun resort town that all smiles and sunshine and even some cute flowers. What could possibly go wrong?
Advertisement:

Baron Omatsuri and the Secret Island is the sixth One Piece film in the long-running franchise, and notably the darkest of the films so far. The film was directed by Mamoru Hosoda, with the screenplay by Masahiro Ito. It was released on March 5, 2005.

The film opens with the Straw Hats receiving a bottle with a note inside challenging the recipients with a strong crew to come to their island resort. Enticed by the promise of food, recreation, and (in Sanji's case) women, the crew heads for Omatsuri Island. At first it seems the place isn't as advertised as no one greets the crew upon arrival. Heading in further, they manage to find their destination. But the owner, the titular Baron Omatsuri, won't let them relax without taking the "Ordeals of Hell", nearly impossible tasks that seem suited only for the strongest.

The crew is initially against the tests, but Luffy, thrill seeker that he is, is more than happy to take em on. However there are other occupants on the island that aren't part of Omatsuri's group and the crew slowly begins to find out that something isn't exactly right about the island and its staff...

Baron Omatsuri and the Secret Island provides examples of:

DJ Gappa keeps adding "pu" to the end of his sentences.

Alternative Title(s): One Piece Baron Omatsuri And The Secret Island

DJ Gappa keeps adding "pu" to the end of his sentences.