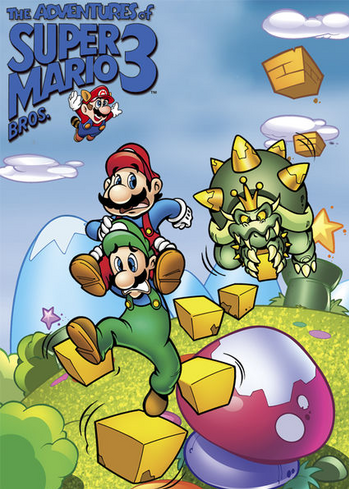 I'll get those plumbers!
"It is a legend no one will forget. Everyone thought King Koopa had left the Mushroom Kingdom, and then—his Doomship attacked! King Koopa was back! With the greatest danger ever known: his Koopa Kids. Using their new superpowers, the Super Mario Bros. rescue Princess Toadstool and beat back the evil Koopa family."
—The Narrator, the opening titles.
The Adventures of Super Mario Bros. 3 (1990) was the second of three cartoons based on the
Advertisement:
Super Mario Bros. franchise, this one based on Super Mario Bros. 3. It is about the Marios' adventures in the game's worlds, with the Earth—er, "Real World" getting involved frequently. It also featured King Koopa's Koopalings, who have completely different names from their video game counterparts.

Originally broadcast on NBC alongside the second season of Captain N: The Game Master, the series suffered from a lack of advertising due to NBC exhausting their advertising expenditures toward another Saturday morning series, Saved by the Bell.

The Adventures of Super Mario Bros. 3 contains examples of: