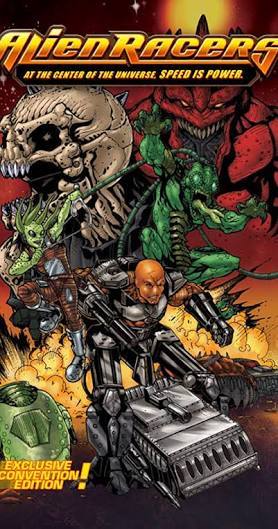 A race between the races.
Advertisement:

Alien Racers is a 2005 sci-fi CGI animated series that aired on 4Kids TV and Teletoon.

Xenoc, the heart of the universe, holds the valuable energy source known as Xeno-energy. It has the power to create or destroy. For eons, this cosmic energy gathered and destroyed civilizations until the wisest and oldest species, Zenterrans, managed to land containment chambers on the planet surface, which they built with the help of Fyran mechanics. Fearing that every race would be warring over the contained energy, the Zenterran Master Khadan issued a contest. Each alien civilization would choose a champion to race for this great power, and whoever controls the most Xeno-energy will decide the fate of the universe.

The champions who compete for Xeno cells include Ultrox, a cyborg Alpharon scientist, G'rog, a Na'tal athlete, Gnarl, a Kragnan war commander, and Skrash, a skeletal undead creature who is Xenoc's only native resident. The four champions compete fiercely over the chance to acquire the tremendous power of Xeno energy, to use it for good...or for evil.