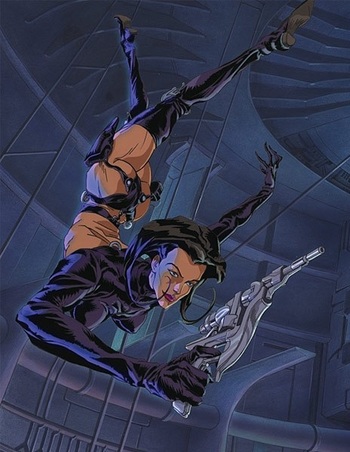 "My name is Æon Flux. I'm here on a mission to assassinate Trevor Goodchild. Is everybody listening? Do you believe me?"
The original impetus behind the Æon Flux pilot was a critique of the manipulation of sympathy in Hollywood movies.
— Peter Chung
Advertisement:

Back when MTV regularly produced animated programming, they fronted some experimental animation. Æon Flux (1991-1995) is probably the fourth-best known example of these series (after Beavis and Butt-Head, Daria, and Celebrity Deathmatch).

Possibly the best way to describe Æon Flux is that if you had ever seen it before, you would be able to recognize it immediately. The art style is a strange combination of Expressionism, Cyberpunk, and Gnosticism. One of the most enduring images of the series is that of a human eye staring at a fly that is trapped in its eyelashes. The episodes would attempt to use the art style to further the viewer's interest as opposed to wordiness. The early shorts had no spoken words to speak of, unless you count a single "plop". As a whole, the show was a thorough deconstruction of action hero tropes and cliches.

The actual content proves even stranger than the art — our lead character is a highly self-motivated secret agent doing spywork (or possibly just sabotage in the name of anarchy), and is Stripperific to pretty much the greatest conceivable extent. Her arch-nemesis and lover, Trevor Goodchild, is also a main character; a morally-ambiguous totalitarian ruler attempting to be a benevolent dictator.

The episodes tend to be fairly disconnected from each other, and center on the two main characters' (Æon and Trevor) interactions, political and personal, and the themes surrounding them.

The original series is often erroneously categorized as anime. Although creator Peter Chung is South Korean, the series is considered more in the spirit of Euro animation.

The show was made into a live-action movie in late 2005 starring Charlize Theron, in which the plot, characters, themes and artistic style were unrelated enough to the original series to cause the original creator to feel humiliated when he saw it. A licensed tie-in game was made to try and link the two, but that didn't end well; a movie tie-in comic by Dark Horse Comics was a little more successful at capturing the feel of the original show, however. A live-action reboot series has been announced for Paramount+.

On a final note, Æon Flux is historically significant for being the first adult animated drama ever produced in the United States. As of 2022, it remains one of only seven such shows to have ever aired.

Example of:
Ignore the Fanservice