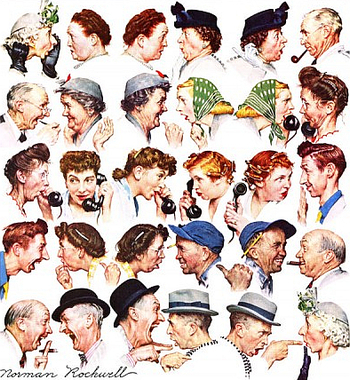 She told him that they said he knows what she learned about him saying I did what?
"He'd staggered in, covered in blood and mud, carrying a crossbow and, d'you know, when they went back to look there were seven dead men. By the time that sort of story had gone ten miles he'd be carrying an axe as well, and make that thirty dead men and a dog."
— The Fifth Elephant
Advertisement:

Whenever tales are spread mouth to mouth, particularly among Gossipy Hens, every speaker adds something of their own, going as far as changing a bar brawl into a raging war between the four largest nations of whichever world the story is placed in.

This trope is mainly about the process, but also describes the outcome, even if the process wasn't shown on screen. Shrouded in Myth is the outcome when this is used to exaggerate a character's badassitude to epic levels. Of course, this process must have taken place to produce the legend; spreading false rumors about oneself in order to gain respect/fame/money/hot babes/whatever the character wants does not apply here. Malicious Slander, alas, also develops through this.

The process is similar to a children's game which goes by many names, such as Broken Telephone, Silent Post, Chinese Whispers and many more. In French it is known as téléphone arabe (Arab Telephone). In this game, one person in a line whispers a sentence into the next person's ear, and by the end of the line, the sentence has evolved into something unrecognizable, and probably lewd, too. When Played for Laughs, the line will typically be incredibly small, such as around five people, while the final rumor will have nothing in common with the original.

Painfully common among certain political circles who shall be collectively known as "low-information voters", and beloved of the demagogues who rely on them for their paychecks. (The political leanings of said voters and demagogues are all over the map.)

Compare Memetic Mutation, Oral Tradition, and Snowball Lie. See also Urban Legends. Can be a cause for God Never Said That, but isn't directly synonymous with it.

open/close all folders
Anime and Manga
Asian Animation
Comic Books
Fan Works
Films — Animated
Films — Live-Action
Literature
Live-Action TV
Magazines
In one "Production Notes" column in Doctor Who Magazine, Steven Moffat says that even the stories he made up are now totally unrecognisable to him, claiming that the last time he heard the one about Matt Smith's costume (that they were trying various costume options that didn't quite work, but Matt liked the bowtie look, despite everyone's doubts, and was right) it was something like "The Doctor was going to be a PIRATE! With ONE LEG!! And we actually SAWED MATT'S LEG OFF and NAILED A PARROT ON HIM!!! But he was REALLY UNHAPPY and he CRIED, and it was really LATE, and it was a DISASTER, and Matt was going to have to play the part NAKED, and then a MAGIC BOW TIE LANDED FROM SPACE!!!!!"
Music
Newspaper Comics
Radio
Theatre
Video Games
Webcomics
Web Original
Western Animation
Real Life

Why was my name the only thing they got right?

Clearly, all gossip is true.

Mickey saying that they couldn't run the place without Minnie somehow turns into being better off without her thanks to Clarabelle's gossip.

Clearly, all gossip is true.

Mickey saying that they couldn't run the place without Minnie somehow turns into being better off without her thanks to Clarabelle's gossip.