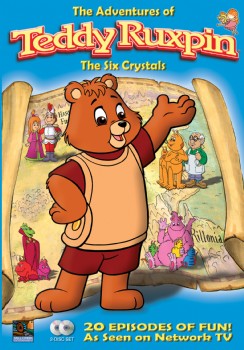 Come dream with me tonight!
Advertisement:

The Adventures of Teddy Ruxpin is a syndicated 65-Episode Cartoon produced by DiC Entertainment and Atkinson Film-Arts based on the popular toy by Alchemy II and Worlds of Wonder. Since 2019, the cartoon has been distributed by Henson Independent Properties.

It follows young Teddy Ruxpin (Phil Baron) as he leaves his home on the island of Rillonia with his best friend Grubby (Will Ryan) to follow an ancient map which leads him to find a collection of crystals on the mainland of Grundo. With the help of their new friend Newton Gimmick (John Stocker), Teddy and Grubby discover the magical powers of what turns out to be an ancestral treasure as well as an organization with ambitions to use it for evil. Along the way, Teddy learns the long-lost history of his species and clues to the location of his missing father.

Now has an in-progress recap page.