Western Animation / A Monster in Paris 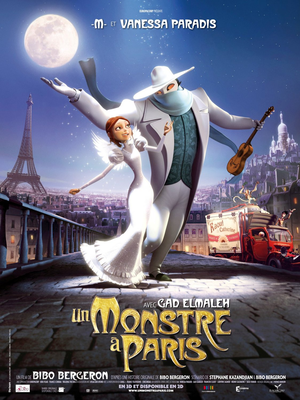 "And all the headlines read, for the whole world to see, a Monster in Paris."
Advertisement:

A Monster in Paris (Un Monstre à Paris) is a French animated film directed by Eric "Bibo" Bergeron, with music by Matthieu Chedid, a.k.a. -M-, who's also Francœur's singing voice in French. Vanessa Paradis provided both the speaking and singing voices of Lucille.

During the Great Flood of 1910, Émile, a shy movie projectionist, and Raoul, a colorful inventor, find themselves embarked on the hunt for a monster terrorizing the citizens of Paris. However, the monster takes refuge with a beautiful, kind-hearted singer named Lucille and is revealed to be actually quite harmless. Now all of them must continue to protect the monster, Francœur, from the chief of police who's out to kill him.

A Monster in Paris provides examples of: