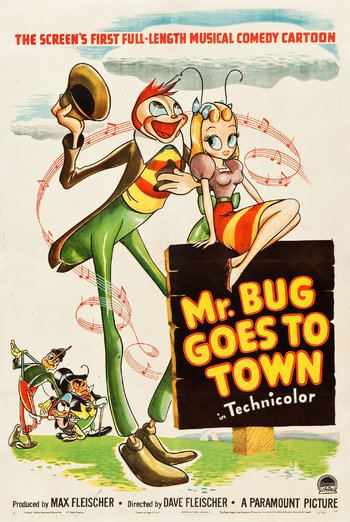 Also known as Hoppity Goes to Town and Bugville, Mr. Bug Goes to Town is the second—and last—feature length animated film made by Fleischer Studios, in 1941. It is the sixth American animated feature film created and the second not made by Disney.

The film was produced by Max Fleischer, and directed by Dave Fleischer and Shamus Culhane, the latter being uncredited. The animation directors for the film were Willard Bowsky, Culhane, H.C. Ellison, Thomas Johnson, Graham Place, Stan Quackenbush, David Tendlar and Myron Waldman.

The plot of the film is centered on Hoppity the grasshopper, who has returned to his home in New York, but discovers that his friends are in danger of losing their homes due to humans breaking down the fence that kept their homes safe from trampling feet and tossed cigars to use as a shortcut. The film is centered on this and Hoppity's romance with his childhood sweetheart, Honey Bee. Meanwhile, the villain, C. Bagley Beetle, has romantic interests in Honey himself, and hopes, with the help of his henchmen Swat the Fly and Smack the Mosquito, to force her father, Mr. Bumble, to give him her hand in marriage.

Being quickly made to pay for the overhead left over by the alleged underperformance of their previous feature, Mr. Bug is a very interesting experiment in feature film animation—the most notable part being that it was one of the first animated films to have an original story made for it, whereas almost everything else during the time had been based on some pre-existing story.

Learning from the mistakes Gulliver made trying to rip off the fairy tale atmosphere of Disney's Snow White and winding up as a cold, inferior imitation in the process, the Fleischers decided to take a more contemporary approach to this film, with its real world New York setting providing a believable, interesting backdrop for the events of the film. While there was still a treacly love story, the characters are still fairly interesting, and some generous slapstick is thrown in here and there to lighten the feeling of the film, obviously keeping one of the positive aspects of Gulliver. The film also benefits from having a much more episodic structure than Gulliver.

Unfortunately, the film had the misfortune of premiering just two days before Pearl Harbor (it was officially released on February 13, 1942)— which, combined with lack of promotion from Paramount (who had no faith in the picture), caused the film to tank at the box office. While the Fleischers were ultimately ruined by Dave Fleischer's contract-violating departure to Screen Gems cartoon outlet, this film could indirectly be considered a part of the Fleischers' downfall.

Harlan Ellison cites this film and his repeatedly thwarted attempts to see it as a small child as one of the defining moments of his entire life. It's also reportedly a favorite animated film of no less than Hayao Miyazaki.