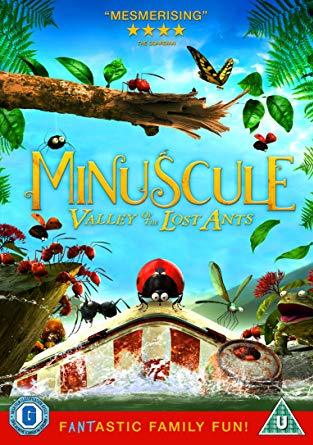 Minuscule: Valley of the Lost Ants (or, in the original French, Minuscule - La vallée des fourmis perdues) is the Big Damn Movie treatment for the Minuscule television series.

It tells the epic story of a small, lonely ladybug separated from her family by accident not long after hatching, trying to find her way in the harsh, scary world... Except the world is rather nice and pretty as anything. And full of interesting stuff humans left (we are the good sort of Neglectful Precursors, apparently). Like toys. Or sugar... Finding herself befriending a group of cute black ants who have procured a box of sugar on the site of an interrupted picnic, she ends up on an oddyssey of adventure on the way back to the anthill, including an encounter with their regular foes, the red ants. And the red ants really want this sugar for themselves. Cue a dramatic Ant War.

The theatrical budget allows the live-action/computer-animation world to become an utterly gorgeous movie, the lack of no spoken dialogue continuing and making the film an example of a modern Silent Film.

A sequel came out in 2019, titled Minuscule 2 : Les Mandibules du Bout du Monde (localized in English as Minuscule: Mandibles From Far Away).

Minuscule: Valley of the Lost Ants provides examples of:

Minuscule: Mandibles From Far Away provides examples of: