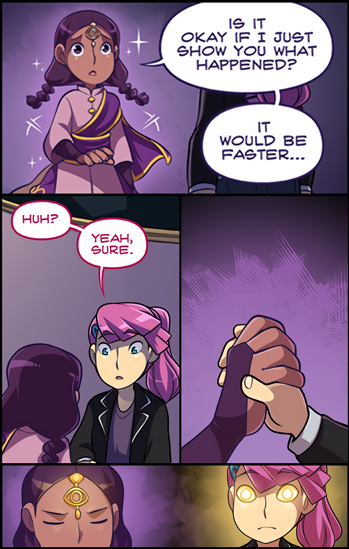 Hopefully nothing dramatic happens while neither's looking, otherwise they'll have to do it all over again.
Lady Trieu: The pills, they're passive-aggressive exposition. If you want her to know who you are, just tell her.
Will: She's not gonna listen. She has to experience things by herself.
Lady Trieu: It's still too cute by half.
— Watchmen
Advertisement:

When Back Story or other crucial information needs to be delivered quickly from character to character (and we do mean quickly, Talking Is a Free Action is not in effect), some characters will use telepathy, holograms, or direct-to-brain downloads to inform others. This also has the benefit of making even the staunchest skeptic at least give the expositor the benefit of the doubt, especially when they have up until this point been living under the Masquerade.

It's worth noting that the differences between this and brainwashing are few. If instead of real memories they beam Fake Memories, coupled with Laser-Guided Amnesia, then the receiver may just think they've only been targeted by an Exposition Beam that served as Epiphany Therapy.

Interestingly, this happens so quickly it functions like a justified case of Talking Is a Free Action.

The acquisition of information may be shown through a Regained Memories Sequence. Compare Upgrade Artifact, which gives a character whole new abilities, Pensieve Flashback, where a flashback is fully visible to the characters, and Storyboarding the Apocalypse, where a villain will have their planned doomsday appear in surreal slide show form.