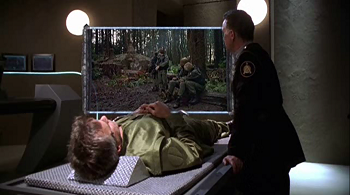 "Dr. Jackson, I'm afraid we have some bad news. Your memory appears to be a Clip Show."
"He's thrashing around while he's having his dream, and his dream can be seen on the monitor screen!"
— MC Mothmaster Murf, "Amazing RoboCop Rap

Speculative Fiction 's answer to literally seeing what's on your mind via a form of an Applied Phlebotinum Machine that hooks up to your forehead and projects your thoughts in visual form onto a screen for all to see.