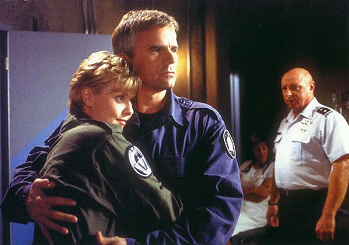 Carter: Sir... are you sure there wasn't something else that you're not admitting?
O'Neill: What are you talking about?
Carter: Something neither of us can admit given our working relationship, our military ranks?
O'Neill: Oh! [Beat, less enthusiastic] Oh. That.
— Stargate SG-1, "Divide and Conquer"
Advertisement:

Many highly regimented organisations, particularly militaries, have rules against their members having intimate relationships with each other (especially if they're both in the same chain of command). The rule-makers tend to feel that such relationships are unprofessional, and that they may give rise to favouritism or abuse of power if the people in question are of different ranks.

Such regulations are a good way to prolong Unresolved Sexual Tension, as characters are forced to maintain a Strictly Professional Relationship despite being clearly attracted to each other. On the other hand, the Secret Relationship which may emerge if characters don't follow the rules can provide plenty of drama itself.

Rules like this are pretty standard in military organizations unless they're only Mildly Military or the writers are using Artistic License regarding military matters. (The relevant military word is fraternization

, although that term is much broader than most examples here, with some militaries banning any kind of social relationship between people at different levels in the same chain of command). Non-military organizations which employ similar levels of discipline can also have this kind of rule. For relationships between people in less tightly controlled workplaces, which aren't necessarily prohibited, see Office Romance. If holding a certain job requires that you forgo all relationships (not just with colleagues), see Vow of Celibacy.