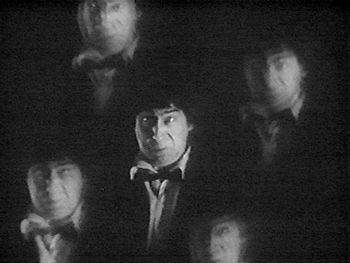 This regeneration will not be pretty...
"All these evils I have fought, while you have done nothing but observe! True, I am guilty of interference. Just as you are guilty of failing to use your great powers to help those in need!"
— The Doctor defends himself before the Time Lords.
Advertisement:

The one with a magic cube... and the one where the Doctor is executed.

Written by Terrance Dicks and Malcolm Hulke. This ten-episode serial first aired from April 19 to June 21, 1969.

The Doctor, Jamie and Zoe land in the middle of no-man's land during World War I — or so it seems. They're taken prisoner and tried as spies, with the Doctor sentenced to execution.

Once they manage to escape, (and get captured again, and escape again, and...) they find out a couple of things are out of place: First off, they are not in World War I, but rather a facsimile of it, which is limited to a certain area. After reaching and crossing a strange barrier of fog, the Doctor and his companions suddenly find themselves being chased by Roman soldiers, and, after crossing the fog again, soldiers from the American Civil War. Wherever they are, apparently recreates many historical wars throughout human history for some strange purpose; and that is not all. The soldiers of the different wars don't seem to remember how they got to the front lines, and all of the generals from the different eras are apparently in on whatever scheme is going on, having futuristic communication devices hidden in their personal quarters and frequently using strange glasses to hypnotize their subordinates into forgetting and ignoring all of the many historical inconsistencies they come across.

It turns out that a race known only as "The Aliens" have kidnapped a number of soldiers from Earth's history, brainwashed them and set them to fighting replicas of their own wars. The survivors will be made into an army capable of conquering the galaxy. They are aided by the War Chief, whom the Doctor recognizes as being one of his own race, and who has provided the Aliens with Sidrats for transport purposes. However, the War Chief plans to double-cross the Aliens and seize power himself.

The Doctor and friends manage to gather a band of human resistance fighters (who were able to shake off the control of the Aliens and were wreaking havoc) to stop the wargames. The War Chief tries to get the Doctor to help him, but fails, and is shot by the Aliens' commander as repayment for his treachery.

However, the Doctor can't return all the surviving soldiers to their right places, so he calls on his own people, the Time Lords, for help.

They arrive and the Doctor is instantly put on trial for violating one of the Time Lords' prime directives — noninterference in other races' history. The Doctor argues that he may have meddled in a lot of affairs, but he always done good. The Time Lords concedes that he has a point, but that he must still face punishment for breaking their laws. He is sentenced to exile on Earth, while Jamie and Zoe are returned to their own times, though with their memories altered so they only remember their first adventure with the Doctor. The Doctor is additionally informed that he must change his appearance again... and while at the time it seemed like a simple annoyance, once the rules of regeneration were later establishednote Such as Time Lords are typically restricted to only 12 regenerations before dying permanently, this meant the Doctor was essentially executed. By his own race.

This story is quite significant besides it being Patrick Troughton's farewell after three years, twenty-one stories and 119 half-hour episodes. As well as ushering in a new Doctor, and a new era in the show with Earthbound exile, this was the first time that the Doctor's race had been named, and that the reason for the Doctor's fugitive status had been explored. This is also the only time during the show's initial run that the Doctor and all of his companions changed at the same time. It wouldn't happen again for another forty years.note With Harsher in Hindsight value! Additionally, this was the final serial to be produced in black and white; all serials produced after this would be made in full colour, which would necessitate a massive overhaul of the show's design work to accommodate details that would be made more visible on higher-resolution colour TVs than on the older, dingier monochrome sets of the 1960's.

During the break between seasons, the Doctor Who strip continued running as always in TV Comic. Since these strips were written before a third Doctor had been cast, they ran with the idea of the Doctor getting a stay of execution for a while and living on Earth, hiding out from the Time Lords and living in a posh hotel with the TARDIS out of action, and becoming a game show panellist, before finally being forced to regenerate by some walking scarecrows. This was the genesis of "Season 6B"

, which many later writers would embrace. The Second Doctor's appearances in "The Three Doctors", "The Five Doctors" and "The Two Doctors" would most logically take place in this gap between "The War Games" and "Spearhead from Space" from Two's perspective (although there is no real reason "The Three Doctors" couldn't occur at any point after "The Invasion").

With 10 parts totaling about 4 hours run time, this is the second longest story of Classic Who behind The Daleks' Master Plan.