Recap / Doctor Who S5 E1 "The Tomb of the Cybermen" 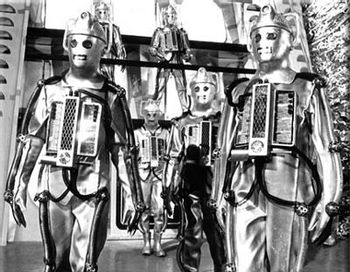 Daft Punk, the early years!
"Our lives are different to anybody else's. That's the exciting thing. Nobody in the universe can do what we're doing."
— The Doctor
Advertisement:

The one with killer silverfish.

The TARDIS lands on the planet Telos, where a group of Earth archaeologists is trying to uncover the fabled Tomb of the Cybermen. The Doctor helps them get in, where they discover the creepy silent remains of the Cybermen's city.

The Doctor helps them to open the way down to the tombs of the Cybermen, whereupon Kaftan and logician Klieg awaken the Cybermen from their cryogenic sleep and reveal that they are in fact there to revive the Cybermen, intending on using their own brainpower and the Cybermen's strength to conquer the universe.

As bad an idea as this would be, it turns out to be irrelevant anyway, as the tomb is just a giant logic puzzle designed to weed out everyone but the smartest people, whom the Cybermen judge worthy to be upgraded. The Cybermen punch their way out of the refrigerated tombs and the big-brained Cyber-Controller seems they will become Cybermen themselves. They soon end up attacking the party while accompanied by little slug-like Cybermats.

Toberman is captured and partially Cybermodified, but the party manages to escape the tomb area and stall off the (still weakened) Cybermen. The Doctor also uses electricity to disable the Cybermats and later the group finds a single Cyber-prototype weapon to keep the Cybermen at bay. At the same time, the Cyber-Controller orders his Cybermen to return to their cryogenic tombs (as they are very low on energy), while Kaftan and Klieg attempt to betray the Doctor and friends by stealing their weapon and using it to seize control over the Cybermen, causing a very uneasy (and temporary) alliance between the Doctor and the Controller to ensure their mutual survival. Kaftan and Klieg end up being massacred by a lone Cyberman and with the mutual threat gone, the Cyber-Controller turns against the Doctor's group, but Toberman's willpower allows him to temporarily overcome his Cyberconditioning and destroys one Cyberman, giving everyone the chance to escape. Finally, Toberman makes an Heroic Sacrifice by closing the entrance to the tomb and activating the door's defence mechanism, which electrocutes both him and the Cyber-Controller, leaving the remaining Cybermen locked inside forever. The Doctor, Jamie and Victoria part ways with the surviving expedition's members and each go on their way.

All four episodes of this story were thought to be lost for decades, until a complete copy was discovered in 1991 in Hong Kong — Prior to October 2013, it was the only complete story of Season 5, of Victoria, and of the first two years of Troughton. As of 2022, it is also the only complete Cyberman story from the '60s.

This serial would mark a crucial turning point for the Cybermen's place in Doctor Who. Having previously killed off the Daleks in the last story with the intention of keeping it permanent (a plan which was ultimately for naught come "Day of the Daleks"), the Cybermen emerged as a suitable replacement for the megalomaniacal pepperpots. Starting with this story, they would become the Second Doctor's closest equivalent to an arch-enemy, facing off against him twice more and marking a total of four appearances during the Patrick Troughton years (compared to just two Dalek stories).

Though the Cybermen made only one full appearance (plus a cameo) during the next decade, owed in part to a concerted effort by the show's staff to reduce the number of clashes with returning villains, by the '80s they would emerge as a direct counterpart to the Daleks, a trait exploited by the show's marketing. The fact that the Cybermen were to the Second Doctor what the Daleks were to the First Doctor didn't go unnoticed by the writers, either, and as soon as the final story of the same season they started envisioning a hypothetical face-off between the two. This idea was vetoed by Dalek creator Terry Nation, but it would ultimately be realized in the Revival Series episode "Doomsday".

Also, this story turned Matt Smith (i.e. The Eleventh Doctor) into a fan of the show, and he has stated that it was watching this serial that inspired his own costume as the Doctor, most notably wearing a bowtie.