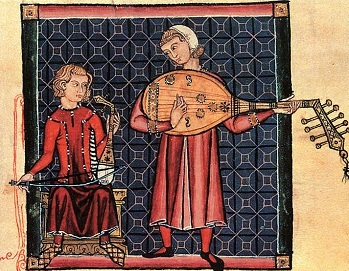 Medieval Ballads are a specific branch of the Folk Song genre. As the name suggests, the form originated in medieval times, most probably during the high middle ages, around the late 13th or early 14th century. The songs and styles cover a number of topics, and the most common themes, like the twa sisters, are found all over the North Sea. The Twa Sisters is by far the most popular, as the song is documented all over the area,from Iceland (hörpukvædi) to Sweden (Systrarna), Denmark (den fortrollede fiolen), and, Norway, where a number of related versions are found. This particular song is even found in Finland. A Norwegian version traditionally sung: click here

People were once at odds about where and when the ballad form originated. It was clear that the style owed a lot to the French medieval romance and arthurian legend, but something didn’t add up. Eventually, scholars agreed upon it originating at the court of Norwegian king Hakon V, who died in 1319. Thus, the place the style was invented was actually Oslo, at the fortress of Akershus, and in the courts of the king. Development came gradually, but the dance tunes at the Norwegian court became high fashion in the late 13th century, as the king held his court in town and had good contact with France. By 1310, this chivalric style spread out and became high fashion. Most of this can be credited to the Norwegian queen, who saw to it that a lot of french romance was translated. This trend had actually florished as early as in the 1260s, when a good portion of European literature came in norse translations. Much of this material contributed to the ballad style.

Later, in the 1500s Danish collectors gathered a large body of songs as performed in Denmark, and those books were popular at the Danish court in the time of King Christian IV. In Denmark, the ballad was never forgotten, and at this point in time, English and Scottish ballads also florished (see the Child Ballads). In Norway, declining into a medieval stasis, the songs fell out of fashion when new instrumental music came in use, but they were still sung as epics, and never actually forgotten.

In the romantic nationalist movements, folk music was considered interesting, and about 1853, Norwegian priest Magnus Brostrup Landstad wrote and edited a whole lot of them, careful to keep the old pronunciations and styles in the dialects. This book became a breakthrough for more collectors, allowing comparative cultural research and giving the scholars opportunities to compare the English, the Danish, the Norwegian and the Swedish material. The Faroe Islands became particularly interesting, because the people there also danced, and still dance

, to their songs, as they apparently have done for hundreds of years. Norwegian enthusiasts who wished to "revive" a long lost tradition, found their clues there, and began a whole new way of performing the songs, also using more recent melodies.

Because of immigration, the style was headed for America, and thus the strain of "Appalachian ballads" emerged.

The Medieval Ballads have a number of subgroups, not all of them chivalric, some of them rather nonsensical:

The ballad style serves as a "father" to "staff" (stev) singing in Norway, particularly the "old staves" (gamalstev

), who share the rythmic pattern with the ballad. Sometimes, single verses can double as staves and as ballad verses. This is very common in the Telemark area. Melodies are abundant as the ballads were sung all over the country.

The ballad comes in different metres and with different refrains. The staff variety comes in four lines, with or without refrains. This variety is found all over the North Sea area.

A second variety has two lines and an ending refrains, while a third would put a repeating phrase in between the lines, and an ending to boot. Sometimes, one line is repeated twice with a follow up line in the end, without any refrains. Mostly, the repeated lines refer to dancing ("My maiden dances in the meadow").

The ballads are stock full of formulas, sometimes to the point of meaninglessness. This makes the songs easy to memorize, but may also be bit bewildering.

My maiden is dancing in the meadow