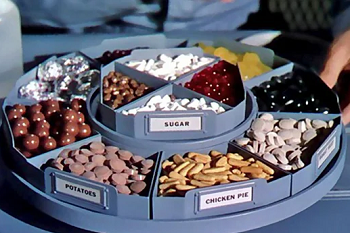 "The thing I always liked about food pills in The Jetsons is that they always seemed to enjoy them so much. An apple pie food pill seemed to bring them as much contentment and happiness as an actual apple pie. You can get much the same effect with Jelly Bellys, true, but they really haven't moved past the dessert genre."
— Lore Sjöberg
Advertisement:

Food is different in the future and on alien planets. It might be more exotic, but for some reason, it's mostly just more convenient. Whether it's the tastiest, most satisfying meal that you've ever had, or just the futuristic equivalent of combat rations, it will come in the form of pills, and not just any pills — Food Pills!

Food Pills typically come in your choice of several perfectly convincing flavors, have no sell-by date, and provide all the nutrition you need.

While once de rigueur for the Kitchen Of The Future during the first few decades of science fiction, they're a Forgotten Trope today—though a character ranting about how the future has not delivered the wonders we expected from it will probably mention the lack of these as an example.

The change is no doubt due to the growth of the health-and-exercise industry and the subsequent general awareness that the human body needs considerably more than just a few milligrams of vitamins per day. Protein, fat, sugars, and carbohydrates require mass and can't be compressed into a tiny capsule. Today's science fiction food tends to have more body. If it's concentrated—such as the "protein pastes" that may be Food Pills' more realistic spiritual descendants — it tends to not taste very good, ranging from bland at best to terrible at worst.

What a lot of writers don't realize though is that human beings simply enjoy real food way too much to ever replace it with a synthetic alternative, no matter how economical it might be. For as long as humans have existed, we have gained pleasure from cultivating, preparing, and consuming food, and one of the key aspects of a culture is what they eat and how. Even if food pills could replace the need to get nourishment the old-fashioned way, they can't replace a romantic dinner for two or a holiday feast for the extended family. Even if synthetic food could taste exactly like the real thing, there's still texture to consider. "Fried chicken paste" just doesn't sound very appetizing. There's also the physical consequences of not eating actual food. Replacing solid food entirely with liquids (consumed or intravenous) can result in hair loss and sudden shift in body weight, as well as not properly absorbing many types of nutrients. And literal pills have the problem of not being very filling, leading to constant hunger which causes hormonal imbalance and can be psychologically torturous.