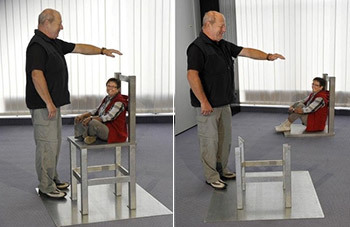 Peter Griffin: Oh, my God, is that... Are you holding up the whole Hollywood sign?
Derek Wilcox: [chuckles] No, no, no, no. The sign was way in the background. I was standing in the foreground going like this when Jillian took the picture, so by forced perspective, it looks like I'm holding up the whole sign.
Peter Griffin: I don't believe you. I think you are a god now. And I will die for you, or kill others.
— Family Guy, "And Then There Were Fewer"
Advertisement:

An intentional exploitation of the camera's 2-D vision. Place an object closer to the camera, and so long as it's in focus, it looks bigger. Or, place something in the distance, and it looks smaller. This is one of the oldest Camera Tricks, and dates back to early still photography.

In the pre-CGI days, this was one of the most commonly-used techniques to make sets appear larger than they actually were. This can be augmented by placing children or "little people" into the miniature background so that they look like they're full-size adults, although this only works if they are seen from a distance.

The only real complicated part of this is focus. You need a camera lens that will focus on both long and short distances at the same time, or one or the other will end up blurry. (See Depth of Field.)

Seriously, Doof? You just had to put a popcorn stand in Perry's viewpoint so he doesn't take it seriously.

Seriously, Doof? You just had to put a popcorn stand in Perry's viewpoint so he doesn't take it seriously.