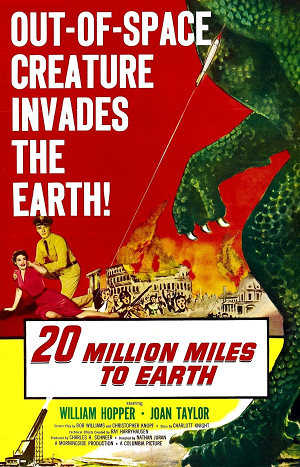 The government of the United States, along with The Pentagon, organizes the first interplanetary expedition to the planet Venus. The spacecraft XY-21 with a crew of seventeen successfully reaches the planet 20 million miles away and vast mineral resources and precious raw materials are discovered on the planet, but atmospheric conditions are extremely harsh and cannot support life from Earth, and several members of the expedition die because of the conditions. None of this is actually seen, but is all explained in dialogue later on in the film.

On the return journey, the rocket is crippled by a meteor and crashes into the Mediterranean Sea off the southern coast of Sicily. The film begins as the two surviving crewmen are rescued by local fishermen before the vessel sinks beneath the waves and are taken to the local hotel. Camped nearby are an Italian zoologist, Dr. Leonardo, and his American granddaughter Marisa, who is, fortunately, a medical student. Marisa tends to the crew herself, Dr. Sharman dies, whilst Col. Robert Calder survives. Calder determines to locate a specimen they brought with them to study how the creature survives in the hostile environment. Meanwhile, the specimen, an egg shrouded in jelly within a metal cylinder, washes ashore and is found by a local boy, who then sells it to Dr. Leonardo.

Overnight the egg hatches a Venusian reptilian creature: the Ymir. The Ymir begins to grow at a prodigious rate due to the abundance of oxygen in Earth's atmosphere. Dr. Leonardo prudently places the Ymir in a cage. Soon, however, the Ymir becomes large and strong enough to free itself. Apparently, the Ymir eats sulfur and passes by horses, poultry and sheep before finding some bags of agricultural chemicals in a barn, one of which is sulfur, and begins to eat. The Ymir only attacks when provoked and after being attacked by a dog and a farmer, it escapes the barn. This time the Ymir runs to the erupting volcanic crater at Mount Etna.

It is found by the Italian army and American army only to be chased into a trap. However, by this point, the Ymir has grown to approximately 10 ft high. The army ensnare the Ymir in an electric net and it is and transported to a zoo in Rome. Believing the situation is over, and themselves safe at last, Calder and Marisa begin to develop a romantic relationship. After studying the Ymir for some time, an accident disrupts the flow of electricity in the lab. The Ymir escapes and is attacked by an elephant. Victorious after the battle, the Ymir then goes on a rampage, smashing through buildings. Calder chases the Ymir into the Tiber River in Rome. Promptly resurfacing, the Ymir attacks the human threat and smashes through the bridge. Firearms are little use against the Ymir.

The Ymir, after being shot at by an armored flamethrower, ends up on top of the Colosseum. After tearing into the brickwork and throwing pieces down at people and soldiers, it is eventually shot down by an intense barrage of rockets and falls some fifty meters, whereby it is crushed by falling masonry.

Originally shot in black and white because Harryhausen didn't have the budget or equipment to create the FX in color. Many years later he authorized colorized versions of this and two other early movies.

This Film Features Examples Of: