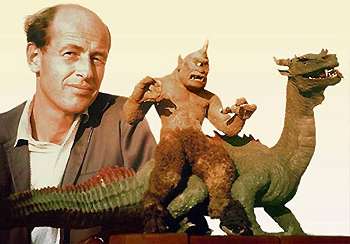 The master of monsters.
Advertisement:

Inspired by the works of Willis O'Brien (The Lost World and King Kong most notably), he became the most prominent Stop Motion animator in the film industry from The '50s all the way to The '80s and worked on such classics as Jason and the Argonauts, Clash of the Titans, three Sinbad films (The 7th Voyage of Sinbad, The Golden Voyage of Sinbad and Sinbad and the Eye of the Tiger ), as well as some of the most notable dinosaur films of the pre-Jurassic Park era. A lesser known fact: most of the settings in these films were made using matte painting, another visual effect technique he was a master of.

These adventure movies would often be more showcases for Harryhausen's talent than anything else, and they had several similarities: