Film / It Came from Beneath the Sea 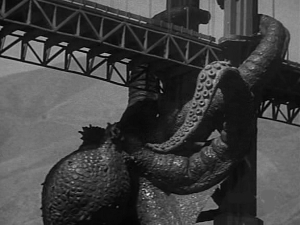 Out of primordial depths to destroy the world!
— Tagline
Advertisement:

Thanks to hydrogen bombs, a radioactive and hungry octopus of gigantic proportions raises to surface to hunt the easiest prey of them all: Man.