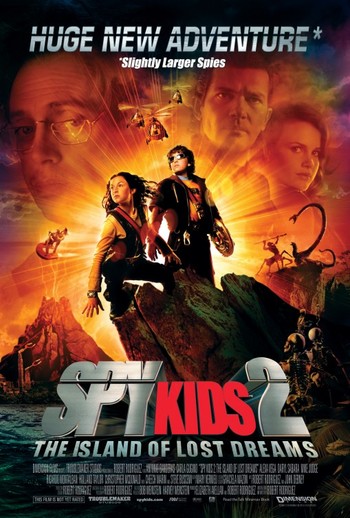 "Do you think God stays in Heaven because He too lives in fear of what He's created?"
— Romero
Advertisement:

Spy Kids 2: Island of Lost Dreams is a 2002 action comedy adventure film. It is the second film in the Spy Kids franchise, following the original Spy Kids movie.

Carmen and Juni Cortez are now Level 2 agents in the Spy Kids Division of the OSS (Organization of Super Spies). At the Troublemaker Theme Park, they rescue President Anami's daughter, Alexandra, from a juggling thrill ride. The children of Donnagon Giggles (Mike Judge), Gary (Matt O'Leary) and Gerti (Emily Osment) get involved in the rescue and take all the credit.

At an OSS dinner event, President Anami names Donnagon as the director of the OSS (though it appears that the teleprompter was hacked). A group of Magna Men storm the event and steal the Transmooker device from the President, though the OSS spy kids try to stop them. Juni gets blamed for losing the device, and is suspended as an agent, though Carmen hacks into the OSS database to reinstate him and give them a new assignment, to investigate a mysterious island near Madagascar.

This film was followed by Spy Kids 3-D: Game Over.