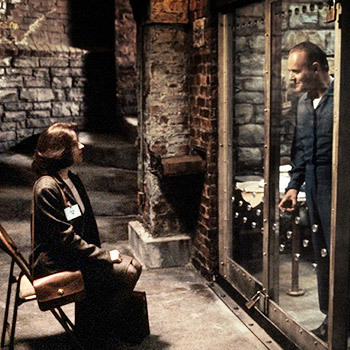 "So, which one of these psychos is gonna help me catch my killer?"
— Homer Simpson, The Simpsons, "The Great Louse Detective"
Advertisement:

A Serial Killer (or other dangerous, violent criminal) is on the loose, and the Great Detectives and Profilers running the investigation can't get a break in the case before the perpetrator strikes again. But luckily, the police have another serial killer already behind bars, who, through knowledge of his own malfeasance, may help the investigators to get inside the mind of the suspect being pursued.

Desperate for leads and not willing to "become" the person he is looking for, the detective running the investigation will still seek this insight by making, at least, one visit to the jail cell of this special prisoner who is just as demented and evil and dangerous as the maniac currently on the loose. Such a prisoner is typically so dangerous that special precautions (shackles, straitjackets, etc.) need to be taken either to make sure he can't escape his cell or can't pose a danger to the detective visiting him. Nonetheless, this prisoner is the only person who can understand and figure out what the detective's suspect is thinking.

Receiving this insight will usually come at a price, however. In exchange for any help he gives towards catching the killer at large, the prisoner will typically want something in return, including a commuted sentence or greater/extended privileges within captivity. Occasionally, the detective paying the visit(s) may be personally responsible for the prisoner being behind bars in the first place, adding to the tension in their meetings. As such, the prisoner may hold ulterior motives for seeking vengeance or escaping captivity or may otherwise try to deceive the detective. However, one way or another, the prisoner will usually be playing some part in driving the criminal investigation (and plot) forward.

The Trope Maker is Hannibal Lecter and the role the character filled in the novels Red Dragon and The Silence of the Lambs, written by Thomas Harris. Trope occurrences frequently pay direct homage to Anthony Hopkins's portrayal of the character in the film adaptation of Lambs. However, where much of Lecter's insight provided to the FBI in catching serial killers derived from his background as a brilliant yet twisted psychiatrist, most other characters in this role will typically give insight based on the modus operandi of their own crimes in helping to catch a similar perpetrator, if not a flat out copycat killer.

Compare Recruiting the Criminal, in which such a person is elected to carry out specific tasks at hand for which their devious skills are useful, and Expert Consultant, who consults on more mundane things.

See Also: Alone with the Psycho.