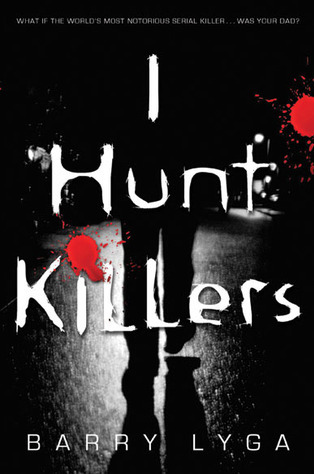 I Hunt Killers is a murder mystery trilogy by Barry Lyga, the writer of The Astonishing Adventures of Fanboy and Goth Girl. The story is about Jasper Dent, the son of the infamous Serial Killer, Billy Dent. After Billy gets arrested, Jasper becomes a bit of a pariah, with people fearing the possibility of him following in his father's footsteps. To prove everybody wrong, he tries helping out the police force. One day, a new series of murders occur by a Loony Fan of Billy called "The Impressionist." Jasper must go deep into his father's actions if he hopes to solve the murder.
Advertisement:

The book was followed by a sequel, Game, where Billy has escaped from prison. The NYPD turns to Jasper after a series of murders committed by the Hat-Dog Killer take place. Jasper soon learns that the Hat-Dog Killer and his father are connected, as well as the possibility that his Missing Mom may still be alive.

The trilogy concludes with Blood of My Blood, where Jasper is framed for the murder of Agent Morales. Jasper must escape from New York City in order to bring Billy to justice once and for all, but on the way, he learns about an organization of killers called "the Crows."

I Hunt Killers provides examples of: